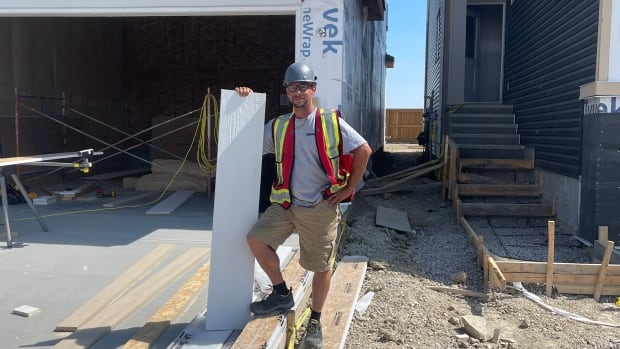 A Calgary contractor, tired of having his building materials stolen, used Apple AirTags to track down more than $10,000 worth of home exterior trim that was removed from a job site this week.

“We don’t get paid enough to supply the material twice,” Dumont said. “It hurts us very much.”

Dumont decided to act. He bought several AirTags, hiding them among his packs of liners and trim.

He was on his way to work on Wednesday when he opened his phone and noticed that three of the beacons were in a house near Falconridge, far from his current job site. Dumont called his colleague to meet him with a trailer at the address given.

They first knocked on the wrong door and the person inside told them a neighbor owned a siding company, Dumont said.

“We went, then I pressed [the button] to locate my AirTag, and it was pointing right at the guy’s backyard,” Dumont said. “Then I just looked over the fence: all my products.

Dumont recorded the incident and later posted the video on social media. He also called the Calgary police.

The service confirmed to CBC News that officers were dispatched Wednesday morning to an address in Castleridge following a report of stolen property.

“Upon arrival, police spoke with a man who claimed to be the rightful owner, as well as a man who allegedly transported the property to the residence,” a spokesperson said in a statement.

Police did not say whether charges were pending or confirm the names of the parties involved, citing the ongoing investigation.

Asked to weigh in on Dumont’s strategy of using AirTags to find stolen items, Calgary police declined to comment but encouraged people to keep documents, such as photos and serial numbers, of their belongings. and report thefts to the police.

CBC Calgary contacted the company that allegedly took the cut by phone, email and social media, but did not receive a response Thursday.

As for Dumont, he said he brought the equipment back to his site on Wednesday. He plans to continue using AirTags to track his building materials and valuables.

He also urged anyone using contractors to do their research and ensure they are using a reputable company.

“There are bad entrepreneurs who just decide to steal products instead of buying them,” he said.

“Just be careful who you hire.”