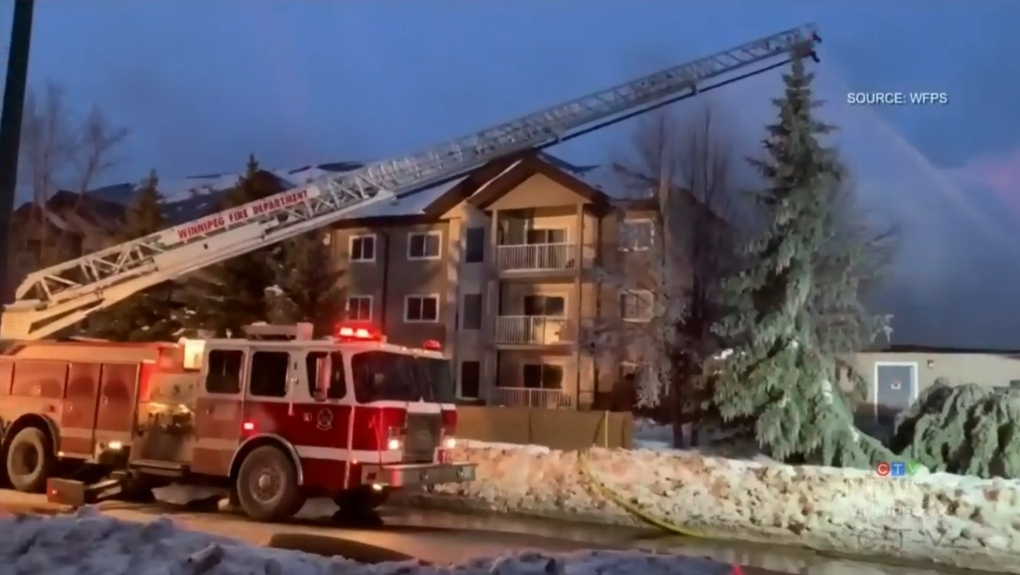 There is no official word yet on when exactly residents displaced by a massive fire in East Kildonan on Monday afternoon will be able to return home.

The fire destroyed a condo complex under construction, damaged two neighboring condo buildings and a few nearby homes.

Although no injuries were reported, the fire took its toll on local residents.

“It was the fiercest fire I have ever seen without being close to it,” said Bonnie Papadopoulos, a local resident who watched in horror as the flames engulfed the building. “It was a four-story wall of flames.”

“The buildings under construction almost look like lumberyards,” Scott Wilkinson, deputy chief of the Winnipeg Fire Paramedic Service (WFPS), said Monday. “They go up very, very quickly. There are no shutdown options.

The two neighboring condominiums suffered extensive fire, water and smoke damage and a parking garage belonging to the complex was completely destroyed, according to WFPS.

Only the charred shells of the cars parked inside remain.

Some forced evacuees from surrounding condominiums returned to the area on Tuesday to assess the damage. A woman, who did not want to appear on camera, said all she had was the clothes she was wearing as she was at work when the fire happened and she was not couldn’t get inside the building.

According to WFPS, the City of Winnipeg’s Emergency Social Services team has been dispatched to the area to help residents find temporary housing. At the time, residents of one of the evacuated suites needed help. All the others left alone and are staying with friends or family.

According to Brydges Property Management, there are 54 units in the two adjoining condominiums that WFPS said residents will not be able to reoccupy until power and utilities are reconnected and cleaning and repairs are completed. necessary repairs will not have been completed.

Some residents are allowed to collect their essentials as the units have been deemed structurally safe. But officials said some suites had suffered such extensive damage that residents would not be allowed to enter them.

Even the windows and siding of the houses opposite the construction site were damaged.

Kathy Cox, who lives across the street, said the flames were so intense she could feel the heat in her home.

“I just couldn’t believe how quickly it spread,” Cox said. “I felt it inside, looking out the window, I felt the heat and all of a sudden the windows started cracking.”

According to a worker who returned to the scene on Tuesday, construction was underway at the site when the fire broke out.

In a phone call with CTV News Winnipeg, the president of Pretium Projects, the builder of the condo complex under construction, declined to comment.

Fire officials said displaced residents who want to move into their suites should contact their property management company.

Residents whose vehicles have been destroyed should contact Manitoba Public Insurance.