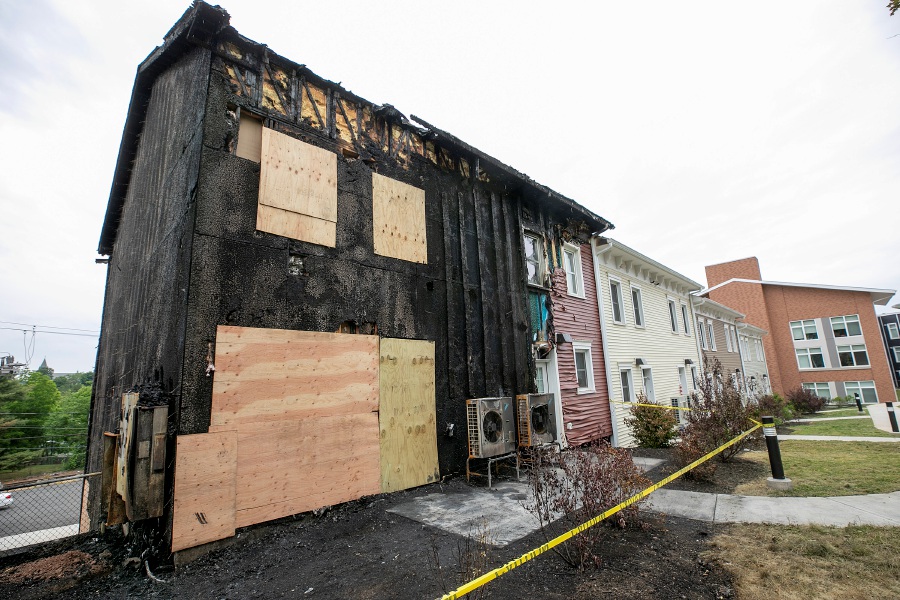 The fire spread through the polyurethane foam mulch between exterior siding and interior walls, severely damaging a block of apartments at 11-18 Crown St., Fire Marshal John Yacovino said. It also damaged at least one other unit and knocked out power to a total of eight apartments in the complex. The affected units face South Colony Street and were left without power on Tuesday.

“It was a fast, high-temperature fire,” Yacovino said. “We thought the discarded smoking materials were directly igniting the moss directly above the mulch.”

“While the building’s electrical service was severely damaged; it’s not the building’s only power issue,” Morgan said in an email. “The whole distribution system of the building was destroyed, main circuit breakers, meters, etc., it affects the rest of the building. As I understand it, 11-18 Crown Streets are currently affected…there is no power to that section of the building. No other apartments outside of this block of 8 units were affected.

There were no injuries in the blaze, which was fueled by high winds on Saturday. Several city fire engines responded and mutual aid was provided by surrounding municipalities.

The fire was brought under control in about an hour and completely extinguished an hour later. A house at 78 S. Colony Street was also damaged.

“This Saturday, the American Red Cross has assisted 8 families 15 adults and 22 children with assistance that may include food, shelter and community resources,” spokeswoman Jocelyn Hillard said. “It depends on the need.”

Yacovino and other fire officials interviewed witnesses before determining the cause. Fire officials will discuss with building management how to prevent future fires by ensuring mulch is no longer near buildings.

“We’re going to talk about removing mulch from buildings,” Yacovino said. “Maybe they can put something else in there like decorative stone. That can go a long way in preventing this from happening again.”

Morgan does not know when Eversource will be able to reconnect the affected apartments and is awaiting a full report from the American Red Cross.

“I’m confident they won’t be able to restore anything until the main building cast has been replaced,” Morgan said.

The 81-unit complex was built by Michael’s Organization and opened in 2020 to low- and middle-income tenants.