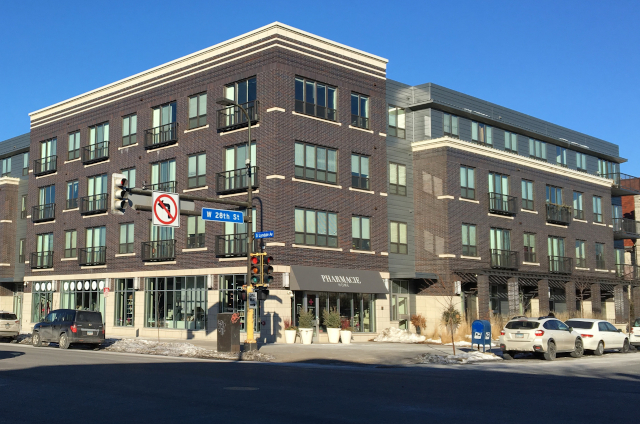 Dress intentions: Minneapolis plans to codify materials that can be used for building exteriors

The Minneapolis Planning Commission this week backed a proposed ordinance that would further regulate the types of residential and commercial building material developers placed outside their buildings.

The ordinance is sponsored by board chair Lisa Bender and housing and zoning committee vice chair Jeremy Schroeder. It would codify into city law what types of materials will be allowed and for what percentage of exterior walls they can be used, creating – as the plan calls it – a â€œhierarchy of exterior building materialsâ€.

Favored in the proposal: traditional materials such as brick, stone, precast concrete, metal panels and glass walls. Materials considered class II, which can be used on a more limited basis: fiber cement panels, clapboard siding and stucco. Class III materials – which could not cover more than 30 percent of a building under the proposal – include unfinished concrete, lumber, and wood composite clapboard siding.

The sponsors say the proposal is not necessarily new in practice, but would improve the current process, which subjects projects to sitemap review. City staff argued that this would benefit builders and developers, providing more clarity and specificity on what materials and how much of them can be used.

While the proposed regulation appears to be based on aesthetics – â€œto ensure a quality, sustainable, affordable and beautiful built urban environmentâ€ – one of the sponsors said he was most concerned about sustainability: â€œFor the members of the Planning Commission, it is their passion. They want a beautiful city, “Schroeder said.” As a city, we have never figured out how to regulate this. As far as aesthetics came, it it was more about durability and having a case that would stand the test of time.

The article continues after the advertisement

There is also an equity component, according to staff report prepared by the Planning Department, as the current informal process ends up benefiting the wealthier residents who know how to operate the system. â€œWithout clear and codified design expectations,â€ says the staff report, â€œdevelopment is often shaped by less formal and more subjective processes at the local neighborhood level. Richer, more organized and white communitiesâ€¦ have been more successful in promoting better development and design products.

The concerns of builders and developers have focused on fiberboard and cement boards, as well as the very concept of cities regulating things like the makeup of new buildings. â€œI find it hard to see the benefit of establishing a rule limiting the percentage of wood on a building when it is such a high quality material,â€ wrote Grant Simons, an architectural designer.

While developers can go through a process called alternate compliance to show that a project meets the spirit and intent of the ordinance, Simons said it would be an additional burden. â€œIt’s doing the design community a disservice to try to regulate these limits when a client usually wants something to move around town as quickly as possible,â€ he wrote. “Exceptions will only be made when we have the privilege of time and money.”

Steve Minn, a former city council member who develops multi-family projects, including affordable housing, objected that fiber cement siding – commonly referred to as Hardie plank – was not a Class I material.

Minn told the commission that he had built 1,500 affordable housing units in Minneapolis and St. Paul over the past 15 years and had used fiber cement board and fiber cement clapboard siding without problem. â€œFiber cement is particularly durable, light, very flexible, adapts very well to colors,â€ said Minn. It also works well in weather protection installations with metal panels, he said. â€œI have used fiber cement panels in a very creative way and I encourage our architects to do so. Sometimes this involved several colors on the same plane and sometimes variations on the projection of the facade.

But Ryan Kronzer, architect and former member of the town planning committee, wrote to say the city was not limiting enough fiber cement plank cladding. He said the proposal was changed in the process to actually increase the amount of a building’s facade that can use the material – by up to 70% – over current city guidelines. He said the amount of surface area for small buildings might be appropriate, but “the problem arises when the vast majority of a facade is fiber cement,” Kronzer wrote. “The material telegraphs the irregularities of the structure behind it, providing an aesthetically undesirable appearance and the potential for water infiltration.” Kronzer also said the material is more likely to be used in lower-income areas of the city.

In response to a question from Commissioner Bill Baxley, an architect, town planner Peter Crandall said a building could be made from 100% cement fibers as part of the alternative compliance process.

Baxley said he was concerned with the concept of the ordinance. â€œI think wading through what materials are appropriate on buildings is very subjective and kind of a slippery slope,â€ Baxley said. â€œIn most cases, as noted earlier, the issues lie in the installation and design of the application and not in the material itself. I’m reluctant to restrict the percentages just because, as Steve Minn mentioned here, even sometimes a monolithic application is better than a piecemeal, chotchkeid up application which is mandatory X-percentage.

The article continues after the advertisement

Baxley ultimately voted for the proposal, as did all of the committee members who attended Monday’s meeting.

Schroeder said he is sensitive to concerns from builders and developers that city regulations add to the cost of construction. But the Ward 11 council member said he believes ensuring that durable materials are used and installed correctly will save people money over the life of a building.

What was approved by the committee was in itself a compromise, a compromise that allows for greater use of materials like fiber cement, as Kronzer’s letter indicates.

â€œIt’s been a tough conversation because you have a number of projects – usually affordable housing – where the product has failed and it has cost the city or county a lot of money,â€ he said. “These are precious dollars.”

When it comes to an ordinance on building materials that are supposed to last for decades, Schroeder said, â€œWe won’t know for another 30 years who’s right about this one.

The matter is now before the council’s affairs, inspections, housing and zoning committee on September 14 and could move the entire council on September 24.

If you (want to) build it, will the materials come? Supply shortage hinders construction