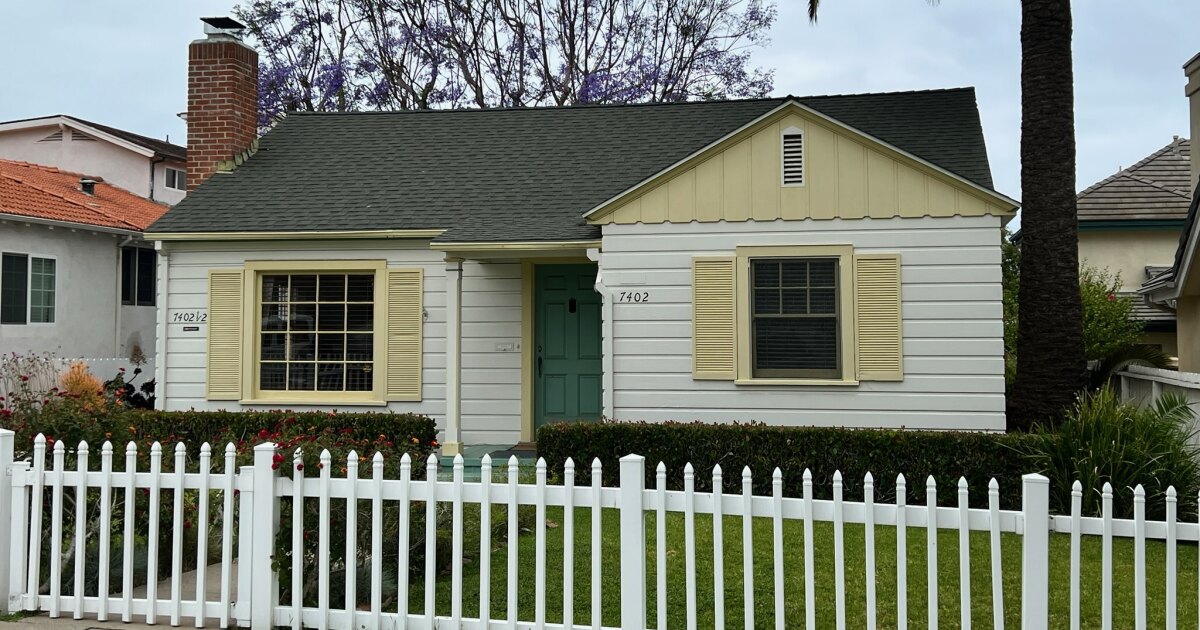 A question about what constitutes a minor change was submitted to the San Diego Board of Historic Resources on May 26 regarding a home in La Jolla.

City staff’s recommendation was to designate the Ervin and Ethel Jesse House at 7402 Eads Avenue as an historic resource with a period of significance from 1938. The designation would be under HRB Criterion C, indicating that the house embodies the characteristics distinctive of a style, type, period or method of construction or is a valuable example of the use of natural materials or craftsmanship.

According to a staff report, the house “embodies the distinctive characteristics through the retention of the characteristic elements of the minimal traditional style and retains a good level of architectural integrity from its 1938 period of significance”.

Specifically, the report cites features such as a one-story gable-and-wing roof form, a small porch, a brick chimney, wooden sash windows, and a large bay window.

However, HRB Chairman David McCullough had questions about the shutters installed on the house after it was built. He acknowledged that features added or adjusted after a home has been built happen “quite often”, but said he wanted to raise the issue so council can ensure consistency in decision-making when changes are made. made to potentially historic properties.

“There have been changes…that would be consistent with the style. But it’s hard to say if the shutters were originally part of the architects’ design for the structure,” McCullough said. “I wonder if adding the panes conveys incorrect historicity of this resource. The distinguishing characteristic of the style is really the lack of distinctive elements.

Since the staff report suggested a designation, San Diego lead planner Suzanne Segur said, “every style is different, every property is unique. We look at how each meets the criteria. For this property, we felt that it embodies the characteristic features of the style. We analyzed the shutters in our integrity analysis and found that they retained design material, workmanship and feeling with respect to the historical significance of a minimal traditional house. …There are levels as to how each [modification] has an impact on integrity.

Further questions were raised regarding the replacement of portions of wood cladding that seemed “too perfect”.

“It looked so perfect it didn’t look like wood,” McCullough said. He added that immaculate condition was “really rare” for a home of this age.

Representing the owner, IS Architecture founder Ione Stiegler said “all the front and sides are mostly original, and the replacement was on the back. So the [homeowners and renovators] had the existing wood to draw from.

Stiegler argued that the house still meets “almost all” of the city’s criteria for historic designation.

“It’s minimal, but it’s so reminiscent of this time of the Federal Housing Administration and us getting out of the depression and into new housing,” she said. “It was a critical time for housing development across the United States. In San Diego, it’s interesting because [this style] is almost always considered infill housing on random empty lots that still exist.

HRB member and La Jolla resident Courtney Coyle spoke in favor of the designation: “In La Jolla, I’m always happy to see what I’ll call a more modest structure come forward for designation; we have lost so many here in the community. It tells part of the story of La Jolla’s development. I would love to see more of these properties show up. … It adds to the story. We often look at coastal cottages… but there is more.

Considering additional information from staff and comments from other board members, McCullough moved a motion to accept the recommendation to historically designate the house, and it passed unanimously.

Benefits of historic designation include the availability of the Mills Act property tax reduction program for homeowners to help maintain, restore and rehabilitate historic properties; use of the more flexible historic building code; the use of the historical conditional use license, which allows flexibility of use; programs that vary according to site conditions and owner objectives; and flexibility in other regulatory requirements. However, houses cannot be significantly altered once they are designated historic.

How to get fast money for auto repair