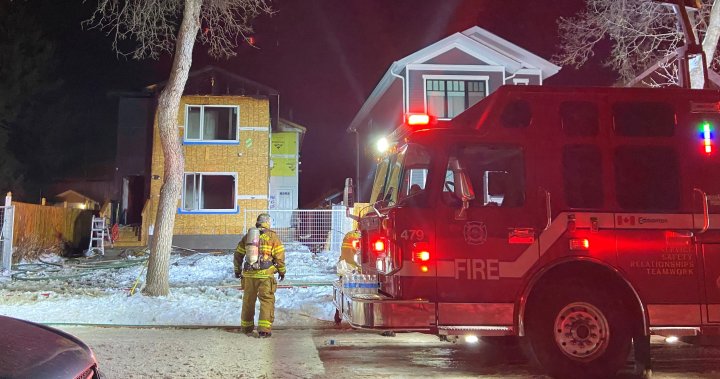 Firefighters were called Monday morning about a fire at a house under construction in a central Edmonton neighborhood.

The teams were called to a house under construction on 95A Street, north of 112 Avenue, just after 5 a.m. and arrived at the scene about five minutes later.

â€œPump 5 arrived on the scene and there was an active fire – it was going up to the front of the building and was fully involved in the roof trusses when they arrived,â€ the district service chief said. Edmonton Fire, Marty McNamara.

Five firefighting units were called to the front-to-back duplex in the Alberta Avenue area, which was framed and had windows and a roof, but not yet siding.

McNamara said crews searched the property and found no one inside. Firefighters quickly extinguished the flames and at around 6:30 a.m. they were still on hand to extinguish hot spots in the basement.

The fire occurred just down the road from the Edmonton Fire Hall 5.

â€œIt’s just lucky that we were able to get here with a quick response,â€ McNamara said. â€œThey were able to light the fire quickly, so there was no exposure. The fire was quickly extinguished.

Edmonton police and fire investigators have been called, but it is not yet clear whether the fire was suspicious or accidental.

McNamara said investigators are called to every residential or work fire.

No one was injured in the blaze and an estimate of the damage has not yet been made.

Dorte Weber lives nearby. He says it’s a lovely area but “could be better”.

A construction worker who spoke to Global News near the scene said it was the fourth development he was working on in the area that caught fire.

“The police are doing what I’m sure they can,” said Clarence McGill, whose daughter lives in the area.

“Someone has to step up his gameâ€¦ I’m sure he’s doing everything he can, but it’s frustrating to say the least.”

It is the latest fire in an area that has seen an increase in fire calls last year.

The fastest growing cause are deliberately started or suspect fires, and fires in vacant buildings and outdoors are seeing the largest increase in frequency, the EFRS said when releasing the data this week. last.

The fire department is improving its data collection and reporting systems to better track fires and determine root causes.

All fire incidents, regardless of cause, crime or severity, are now reported directly to Edmonton Police in real time to improve response.

1:41
Suspicious and deliberately ignited fires on the rise in northeast Edmonton

Suspicious and deliberately ignited fires on the rise in northeast Edmonton