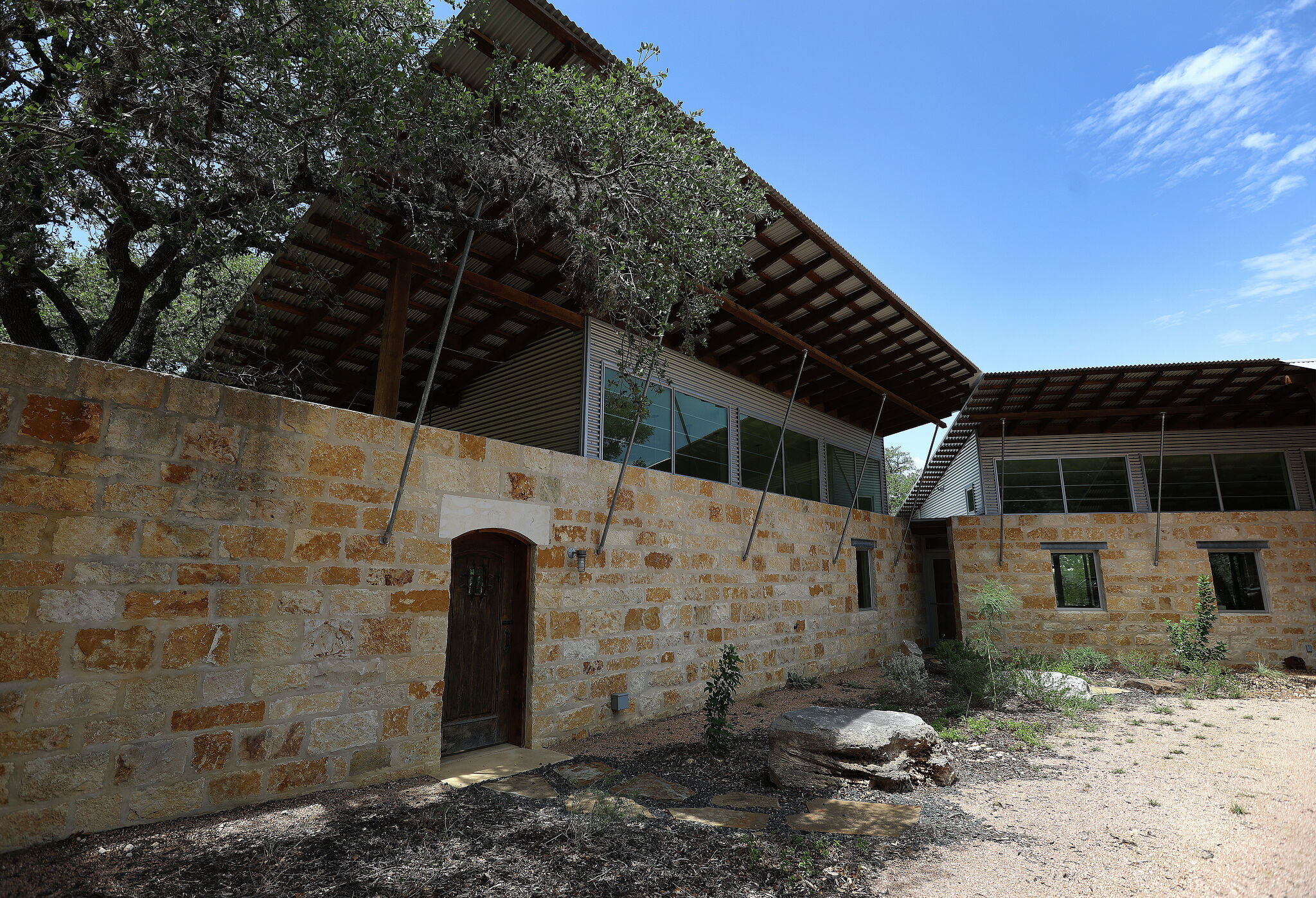 Architect Ignacio Salas-Humara says every house he designs has a story behind it, “even if I have to invent one”.

But the house nicknamed Goat Sheds, located at the foot of a wooded hill outside the town of Medina Hill Country, honestly gets its quirky nickname.

Before the original owners of the house, Carol and Jeff Cadle, got married, Jeff worked on the cattle ranch run by Carol’s father. To test if Jeff was worthy of his daughter’s hand, her father had him dismantle a number of goat shacks scattered across the property. He apparently did a pretty good job of getting Carol’s dad to approve the wedding.

So when Salas-Humara designed the three-bedroom, 3½-bathroom home as a series of separate but connected shelters, each for a distinct function such as sleeping, eating, and parking cars, they naturally dubbed it the goat shelters.

“The house forms a chained necklace,” said Salas-Humara, who declined to disclose the initial budget to build the house. “The sheds are connected to service spaces containing the pantry, laundry, a powder room and a home cinema.”

Construction of the house took nine months and was completed in August 2015. During construction, individual sheds were placed at different angles to avoid having to remove existing trees on the property. In fact, some trees are so close to the house that notches had to be made in the roof overhangs to accommodate the tree branches.

Salas-Humara calls the simple style of the Texas Hill Country home for its harmonious combination of limestone walls, pitched roofs, corrugated siding and exposed red cedar wood. Clerestory windows bathe the interior in natural light, and a steeply angled porte-cochere marks the main entrance. The look is both modern and rustic.

“I kind of wanted it to look like an old ruin that they found and then built a house on it,” Salas-Humara said.

The style so impressed the judges of the inaugural Custom Residential Architecture Network Awards competition, sponsored by the San Antonio Chapter of the American Institute of Architects, that they named Goat Sheds the winner in the Modern Home category.

The Cadles had been living in the house for only about a year when Jeff passed away. In 2020, Carol sold the house to David Huddle and Alysia Jakubowski, who moved in July of that year.

The new owners, who live full-time in San Antonio, say they love the house, which they visit whenever they can.

“I feel peace here,” said Huddle, 60, who works in the food industry. “It’s very relaxing. Right now we’re going out on the weekends, but it’s our retirement home, although I’m probably five years from now.”

Entering the house through the large mahogany and glass pivoting door brings visitors directly into the main living space of the house, a single room where the kitchen is to the left, the dining room is straight ahead and a corner comfortable living room, centered on a large stone fireplace, is to the right. The large size of the room is enhanced by a high ceiling that slopes downwards, front to back.

The clerestory windows up the wall of the great room let in lots of light, but Salas-Humara did extensive solar modeling before construction to determine the optimal size and angle of the roof overhangs to provide better shading. west-facing windows and keep the inside of the house from getting too hot.

The kitchen is dominated by a central island topped with a slab of beige granite veined with gold and copper. The minimalist cherry cabinets have only small handles at the bottom and the range hood is hidden behind the doors above the stove; the only visible part a thin horizontal line that lines up with the bottom of the cabinets.

“We really like to cook in the kitchen,” Jakubowski said. “The island is amazing, and having all this space is awesome. And I love the pot filler above the stove.

The kitchen also offers perhaps the best view of the surrounding countryside through the three-sided windows that project into the back porch.

“The window is transparent, so the view when you’re cooking dinner or breakfast is just stunning,” said Jakubowski, 48. “When the light shines, the kitchen becomes the heart of the home.”

Although they love the house, Huddle and Jakubowski said one thing was missing: a wood-burning fireplace.

While the original design of the house included a fireplace in the back of the room, the Cadles didn’t want the upkeep. So they installed built-in cherry wood cabinets and a big-screen TV in its place.

More Hill Country homes: 3 sisters build a home for the elderly with a huge kitchen

Luckily, Salas-Humara still had their plans, and they were able to fit a fireplace exactly where it was originally supposed to go, down to the stone that matched the rest of the house they found in a nearby quarry.

The couple were also drawn in by the view through the 24-foot-wide sliding glass doors that open to a 14-foot-deep porch overlooking a pair of valleys, one to the south, the other to the east.

The owners suite at the north end of the house is quite simple. But it doesn’t have to, with two 12-foot sliding glass walls that converge at one corner and open up to sweeping views of two adjacent valleys. The exterior roof extends to create a compact, wraparound porch, while built-in screens lower to cover open doorways, providing privacy while allowing cooling breezes through.

Larger clerestory windows along an upper wall let in light and, in the evening, allow for star gazing

“When we have a full moon, this bedroom is so lit that you don’t even need a nightlight,” Jakubowski said. “It is so beautiful.”

One of the house’s most distinctive design features is found in the bathroom powder room, where a specially placed window, requested by the original owners, provides what can only be described as a bird’s eye view of the outer courtyard and beyond. It’s a must-have for first-time visitors to the house.

The south wing of the house consists of a home office, two guest bedrooms and a home cinema.

The bedrooms both have double pocket doors which when opened make them appear larger than they are.

“Opening the doors makes the hallway an integral part of the room,” Salas-Humara said. “It also lets more light into the room from the hallway windows.”

Another special feature of the house is a 40 foot by 40 foot game room on the south end. Originally, this was to be Jeff Cadle’s train room. An avid model train enthusiast, he planned to have a large diorama painted on the curved wall that would surround what promised to be a massive installation.

“The mural was apparently going to have mountains, clouds, and long-distance views,” Huddle said. “It’s a shame he died before he could do that.”

Huddle and Jakubowski admit they’re still trying to figure out what exactly to do with the room. For now, it’s a holdall containing practice equipment, a pool and ping pong table, a small putting green, a dart board, a coke machine and other gym equipment. games.

“Ultimately, it will be a party hall,” Jakubowski said. “It’s a huge room and there are so many possibilities. That’s what’s so cool about it.