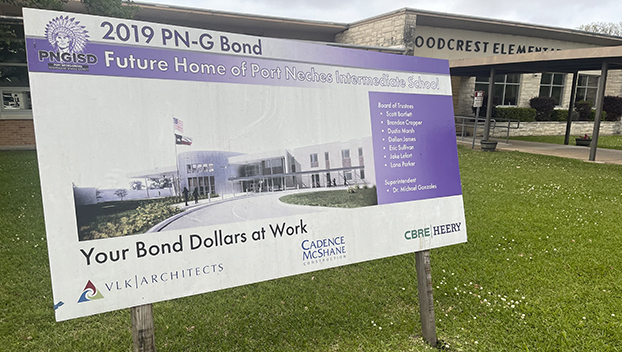 The news broke this week to obviously angry district administrators and school board members.

His comments came after Colby Rose of Cadence McShane Construction Company briefed district leaders on the two facilities under construction at the Woodcrest Elementary site and the former West Groves Education Center site.

Also present at the monthly board meeting was Gary Whittle, director of project management for CBRE Heery, who frequently attends to give updates on the $130 million bond issue passed in 2019 for consolidate seven existing schools into four new buildings.

Both sites, he said, were awaiting delivery of construction steel, as well as generators, which last week were delayed from May 1 to the end of May.

“Overall we’re making progress, not the progress we’d like to make,” he said. “Right now we are reviewing a…certificate to occupy the building in October.”

Board chairman Scott Bartlett said the district had been questioning progress for months and was told that timelines had been adjusted to stay on schedule.

“What changed? Because I had my doubts in January, to be quite honest with you,” he said. “But I was just fed what I wanted to hear, That’s what I feel. And now we’re at this point where all of a sudden the earliest we’re looking at is the middle of the semester before we can send these kids there. And we will make adjustments. But what’s the big change all of a sudden? We are still facing steel problems?

Whittle has spoken at previous board meetings about the escalating cost of materials, saying they have various methods to stay “on track.”

“We were made aware of the issue in October,” Gonzales said Monday at the monthly board meeting. “Not only did we think we’d solved that and the steel would be here in December, but we actually paid a pretty penny to get that steel on time…to prevent that from happening. But we here are a few months later, exactly where we didn’t want to be.

Halfway through the update, the timeline changed.

“Each month our confidence has gone down a bit, but it’s not in our nature to give up,” Whittle said. “We continued to work hard to make that date August 10. Standing here today, the October date is – again – achievable. If I’m being completely frank, a January date or year-end date is more realistic.

“We’ve had a false narrative this whole time,” he said. “Our story couldn’t be checked because… you couldn’t report your story to give us the right information. There are 132 million reasons why we need to be transparent with our community. This is not a $100,000 baseball stand. (These are) 70-year-old schools in this community.

RELATED: Updates given on the Middle Campus construction schedule for Port Neches & Groves

The expected lifespan of the buildings was mentioned by Assistant Superintendent Julie Gauthier when she said working with generators was not an option.

“Our taxpayers put a lot of money into it. We don’t do anything about the generator power. It’s the wettest time in our community – this time of year – and you’re going to try painting the walls or siding the generator?

Whittle said it was the first time in his CBRE career that a deadline had been missed.

“I will share with you personally, this is a very difficult thing for me and for CBRE,” he said. “It’s not OK. We don’t miss deadlines.

He added that the district has been cooperative throughout the process.

“Every time we asked for…a decision, an approval, a contract, a check, whatever, the district responded faster than any district we’ve worked with,” he said. . “None of this could have been controlled by the district.”

Rose said “many missed days” was the reason cited by contractors for missing the deadline.

“Our taxpayers have supported us to build incredible schools,” Gauthier said. “Our children, our community, everyone deserves it. We go through this all the time and there are two operating speeds on your site: slow and slow. And it’s so frustrating. For us in the school community, we have 187 days to make an impact. It’s getting in there; give it your all for 187 days. And we haven’t seen it one of your days. You’re all going to leave, but we live here.

Gauthier also said Cadence McShane is not the construction company overseeing the two elementary schools slated to open in the 2023-24 school year.

These contracts were awarded at the February board meeting to Sedalco Construction Services.

Whittle said there are “contractual opportunities” for the district to recoup funds.