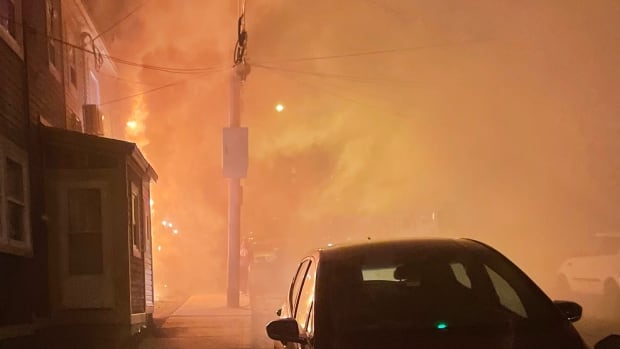 It was a deadly Saturday night in St. John’s, with one man killed in a house fire and another dead in a serious car crash.

Firefighters from three stations responded to a fire on Coronation Street in the city center after 11 p.m. which destroyed a townhouse and damaged nearby homes.

The St. John’s Regional Fire Department confirmed there was a man in the home at the time of the fire and was sent to Health Sciences Center after first responders recovered.

The Telegram reports that the man died as a result of the fire.

One man was killed and another was sent to hospital, according to The Telegram.

The Royal Newfoundland Mounted Police said the crash was under investigation and asked any witnesses to contact police.

“The house just went up”

Taylor Bartlett witnessed the house fire on Saturday night, walking out of her home to find flames belching from a nearby townhouse.

“My next door neighbor was running a guy out of the house who kept trying to run back, because his brother was there,” Bartlett said, reached by phone Sunday morning.

She said her neighbor entered the house and found a man downstairs, pulling him to safety.

But within five minutes, she said, the whole building was completely engulfed, with another man still inside.

“The house has just been built,” she said. “The vinyl siding was melting off the side of the house. It was really, really scary.”

Barlett said firefighters worked to fend off the flames for hours and some of his neighbors evacuated for the night.

She said the deceased man had lived in the house for about 40 years.

RNC firefighters are on site Sunday morning. The cause of the fire is still under investigation.