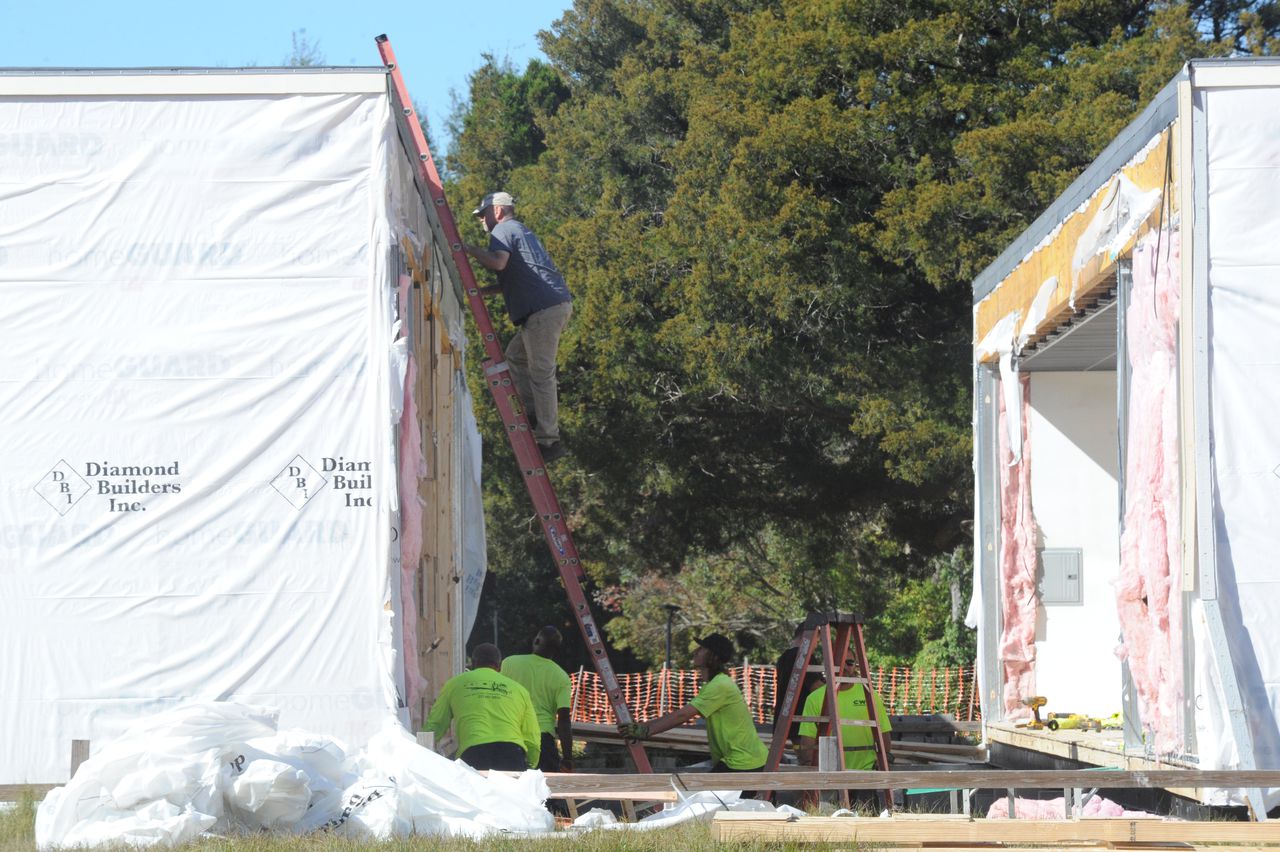 “This is the house of Africatown”: a museum telling the story of the slave ship Clotilda is expected to open in April or May 2022

Darron Patterson tried to hold back tears as he watched the coming together of two large modular units that will be part of Africatown’s first museum structure.

Patterson, president of the Clotilda Descendants Association, recalled on Monday walking Wimbush Street from Mobile County Training School in the 1960s, never once thinking that his community’s heritage would one day be celebrated in a museum which should generate international appeal.

â€œThis is the house of Africatown,â€ Patterson said. â€œIt all belongs to them. “

The house is called the “Africatown Heritage House” and it is officially under construction after four large trucks transported the components of the prefabricated structure to Africatown on Friday. Two more modular units are expected to arrive this week, and work crews are expected to have the structure erected and roofed before Thanksgiving.

The contracts estimate that it will take two months to complete the construction work. The Mobile History Museum, which has been working for more than a year and a half to organize the exhibition titled “Clotilda: The Exhibition”, estimates that it will take 12 weeks to install it.

The schedule for the opening of the first tourist attraction in Africatown since the discovery of the Clotilda in 2019 is now set for late April or early May.

â€œThe arrival of modular units is a huge step forward,â€ said Mobile County Commissioner Merceria Ludgood, who was instrumental in securing funding for the $ 1.3 million project. â€œInterest is high and we look forward to sharing the educational and inspiring story of Africatown with the world through what will be powerful and emotional exhibits.

Meg Fowler, director of the History Museum of Mobile, said half of the structure will be devoted to exhibits chronicling the last transatlantic slave voyage from West Africa to the United States. La Clotilda, with 110 enslaved Africans on board, arrived in Mobile Bay in 1860. Survivors of this slave trade established their home in an area north of present-day downtown Mobile, which has long been referred to as Africatown.

â€œThis is the best documented Middle Passage story there is,â€ Fowler said of the upcoming exhibit that will detail the Atlantic slave trade involving Europe, Africa and the Americas. â€œWe have an abundance of primary source material. Visitors will read and hear powerful stories firsthand.

Fowler said the Clotilda artifacts that were discovered in the murky waters of the Mobile River in May 2019 will also be on display. She said the pieces are small and will be exhibited underwater.

â€œWe designed a tank system to hold these artifacts because they’ve been underwater for 150 years and they have to stay underwater (in order to be) preserved,â€ Fowler said. “They would disintegrate if exposed to air.”

Fowler said the narration for the exhibit will focus on the survivors of the Clotilda. The exhibit, she said, will also include the history of discovery and the marine archeology behind the discovery of the slave ship.

She added, â€œWe hope this will be a powerful multisensory experience for visitors. “

Fowler said she would wait until construction of the building was completed before her staff could come in and start their work. The construction project could last until early next year, according to Lloyd Hughes, the general contractor for the project.

â€œAs soon as we get the units and the roof up, we’ll go inside and work on the plumbing and the tiles and stuff like that,â€ said Hughes, who operates a family business based in Mobile. â€œIt’s like regular construction work once we get inside. “

He estimates a period of two months for the completion of construction. He said before Thanksgiving the whole structure should be assembled and with a roof installed.

He said two more modular units are on their way to Africatown from South Georgia.

He said production of the six units has been slowed down due to the COVID-19 pandemic. The initial schedule for the arrival of modular components has been set for July-August.

â€œOur thing here was to get the production lines up and running again after the pandemic,â€ said Hughes. â€œThe factory (which made the modular units) said it (was trying) to hire more peopleâ€¦

The Heritage House, when completed, will be a 5,000 square foot structure that will include an entrance porch, lobby, restrooms, conference room, offices and exhibition hall. A memorial garden will also be designed as part of the landscape and will incorporate structural ceramics by artist Charles Smith. Its exterior finishing material will be siding painted in colors chosen to honor the enslaved occupants of the Clotilda and to symbolize the strength and perseverance of their descendants, according to Mobile County.

The house will be a permanent structure through the Mobile County Training School and adjacent to the Robert L. Hope Community Center in the heart of the Africatown community. Future projects are also underway, including a $ 3.5 million visitor center across from the Vieux-Plateau cemetery. Officials also predict that tourism-related activities will increase next year to include walking and on-water tours of the community.

Is your home at risk of fire? This online tool could tell you

Salem, MA, a house disappears in a fire