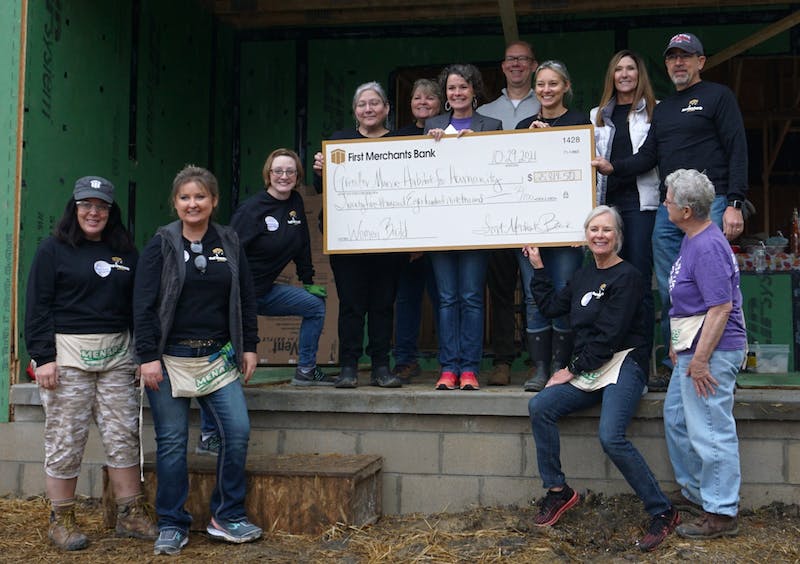 Editor’s Note: Muncie’s Habitat for Humanity withholds the last names of its affiliate partners to protect victims of domestic violence and promote a peaceful community.

Dark blue clouds cover the sun as the October wind picks up the coconut logs outside 713 E. Willard St. The light dusting relieves grime and sweat, but can be bad news for the pig pen instead of a front yard.

Ankle-deep mud is ignored as it is trampled through the dusty subfloor littered with metal ladders. The constant sound of hammers, drills, and the kind of mechanical vibrations that seem to interfere with your brainwaves echo between the houses like a community chime.

The construction site seems pretty normal and no bad weather keeps the hard workers from meeting their deadlines. However, 713 E. Willard St. is different. The footprints in the mud show the hard work that women volunteers from the community put into this house, building it from scratch.

Through home improvement videos and other programs, women continue to be empowered in the construction field, and Muncie’s affiliate sector of Habitat for Humanity aims to help empower and inform women since 2001. The women’s build is part of a larger group of themed builds the organization runs to help bring community volunteers together.

Eileen Oaks Molter, Director of Resource Stewardship for Habitat for Humanity Muncie since March 2020, has been active at 713 E. Willard St. since the project began.

“These themed builds are groups of like-minded people coming together to raise money and build a house,” Oaks Molter said.

The organization has hosted themed versions in the past, including an interfaith version, and plans to host a veteran-themed version later this year.

The latest construction house for women started in September 2021, which welcomed 13 groups of women to volunteer and build confidence when it comes to working with their hands. These groups range from a community Zumba class to bank tellers to office workers.

“Women Build empowers women to step out of their comfort zone, fundraise and build,” said Oaks Molter. “As the women come together to learn new skills, they can also interact with other teams, volunteers and our partner families. Each Habitat home is a beacon of hope in our community and a testament to the great things that can happen when we work together.

In addition to volunteering their time, the women raised funds through their day-to-day work to help fund household supplies. On October 29, 2021, First Financial Bank came to volunteer for the day, raising $5,300 through bake sales and Jean Fridays – opportunities to dress down on Fridays for a small donation. The bank covered the women’s amount and surprised Habitat for Humanity of Muncie by donating an additional $20,000 on volunteer day.

The house is built primarily by the women of these groups, with some exceptions for plumbing, electrical, and roofing materials and labor, donated by Bone Dry Roofing and Corning Shingles. Muncie’s Tuesday and Thursday crew of trained volunteers are also helping to move the house, although there is no date set yet for when this will be done.

Site Supervisor Jay Earehart has been mentoring groups and working with Muncie’s Habitat for Humanity for seven years. A native of Farmland, Indiana, Earehart always wanted to volunteer more for the organization, but could never find the time until his wife submitted her resume behind his back. Having worked for Habitat for a while, Earehart realized how important community neighbors can be in the building process.

“Your best assets are your neighbors — they keep tabs on your product, even if some neighbors are hesitant to partner with you because they’ve been in situations like this,” Earehart said. “I will find something in their house that I can fix to be on their good side. Now everyone in the neighborhood knows me and keeps an eye on my construction site.

Much like learning to ride a bike, with building you have to scratch your knees a few times before you can learn to ride without a handlebar.

At the start of the day, Earehart explains the goals for the day and shows everything that needs to be done with power tools. After that, women are ready to work. While working on the house’s foundation and installing wooden support beams for insulation and drywall last October, the women of First Financial Bank initially struggled to find the confidence to use tools, Earehart said. In the afternoons, however, the ladies climbed ladders and drilled screws into beams as if they had been raised in the craft – Habitat for Humanity’s secret goal for every volunteer group.

“It’s about building more than a house,” Oaks Molter said. “It builds confidence, it builds the courage to try new things. We brought in a bunch of Jay-Crew, the landscaping company, and all of their office ladies had to come. One of them was installing siding and she thought, “I think I could do this in my house – why am I paying someone?”

Brandie, a longtime Women’s Build volunteer, felt the same feelings after receiving a house build from Muncie’s Habitat for Humanity. Coming out of a bad domestic situation with no prior building skills, Brandie did not feel capable of building or caring for a house because no one had told her she could.

“I was taught that women don’t know how to do this and that — that’s kind of what people think,” Brandie said. “Corn [Muncie’s Habitat for Humanity] taught me a lot of self-confidence and knowledge of things. I don’t have to sit here and call someone to come and help me with this or that – I’ll do it myself.

The new building skills helped Brandie maintain her home and gave her the confidence to continue working with Habitat for Humanity and inspiring other women. She continued to volunteer for over a year and worked with the site managers of the women’s construction project. When it comes to helping women build confidence with walls, Brandie has learned that everyone is hesitant about something. For her, it was summits.

“I eventually have to clean my gutters,” Brandie said. “It’s good to hesitate, but it’s also good to push your limits. You don’t know what you are capable of. »

After learning all the basics from other skilled volunteers, Brandie learned that the most important lesson was to love her space.

“It makes me prouder because I know who built my walls and chose the cabinets and stuff,” Brandie said. “Before the drywall went up on some doors, I had my church come and wrote some scriptures – I could see the names of everyone who helped build my house or their words of love or Bible verses, and it gives you so much more meaning.”

The priority of giving back to the community came after her home was completed, but Brandie knew she didn’t want to stop volunteering for the organization that had given her life and confidence back. Helping new families and women learn the true meaning of Habitat for Humanity has meant more to her than she ever thought, she said.

“I would like to help someone else and make their dream come true too,” Brandie said. “When I started with Habitat I was a little scared because people looked at you like it was a handout. Then I learned, no, it’s not a handout – it’s a kick hand. When someone told me that he was [part of] Habitat made me see everything differently.